Case Study Corporate profit disaster at IBM Over the period 1991–1993, IBM (US) suffered a net…

Over the period 1991–1993, IBM (US) suffered a net loss of almost $16 billion (half the total GDP of the Republic of Ireland at that time) – see Figure 1.5 . During this period, the company had many of the characteristics of a supposedly good strategy: a dominant market share, excellent employee policies, reliable products (if not the most innovative), close relationships with national governments, responsible local and national community policies, sound finances and extensive modern plant investment around the world. Yet none of these was crucial to its profit problems, which essentially arose from a failure in strategic management. This case examines how this came about: see Figure 1.5 . The reasons for the major losses are explored in the sections that follow – clearly the company was continuing to sell its products, but its costs were too high and it was unable to raise its prices because of increased competition. 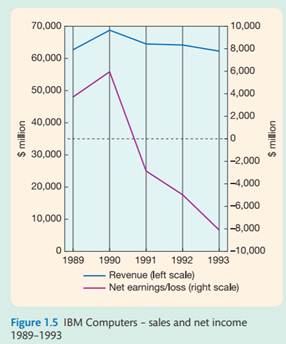 During the 1970s and early 1980s, IBM became the first-choice computer company for many of the world’s leading companies: it had a remarkable global market share – approaching 60 per cent. It constructed its computers to its own proprietary standards so that they were incompatible with other computers but helped to maintain the company’s domination of the market. In essence, IBM offered large, fast and reliable machines that undertook tasks never before operated by machinery: accounting, invoicing and payroll. Above all, choosing IBM meant that risk was low for customers: ‘No one ever got fired for buying IBM.’ Hence, IBM was the market leader in large mainframe computers and earned around 60 per cent of its profits from such machines.
Reflecting its dominance of global computer markets, the IBM culture was relaxed and supremely confident of its abilities and resources. Because of its sheer size and global reach, the company was split into a series of national companies, each operating with a great degree of independence. This meant that central management control was limited, with many key strategic decisions being taken at national company level. Often, central management did not even know what was happening in key product groups until the end of the year, when all the figures for the group were added up. For major new market developments, the initiative was often taken by IBM’s North American subsidiary. Throughout this period, IBM central HQ was content to rely on the success and profitability of its mainframe computer range and observe the rapid growth of another small but related market in which it had no involvement: the personal computer (PC) market.

Development of the PC market

During the late 1970s and early 1980s, small PCs with names like Osborne, Commodore and Sinclair were developed. Some of these were particularly user-friendly – for example, Apple computers. In these early years, IBM preferred to maintain a lofty technical distance. It took the view that the PC market was small and PCs would never handle the mainframe tasks. Some of these small machines were built around common computer chips and software. Although they did not have the capacity to handle any of the large computational problems of computer mainframes, the PC market was growing fast – over 100 per cent per annum in some years. In the late 1970s, IBM was exploring new growth areas and decided to launch its own small machine onto the market.

Because IBM’s existing company structure was large and nationally based and its culture was so slow and blinkered, it chose to set up a totally new subsidiary to manufacture and market its first PC. Moreover, it did not use its own proprietary semiconductor chips and operating software. It acquired them respectively from the medium-sized chip manufacturer Intel (US) and from what was then a small software company called Microsoft (US). IBM took the view that it was doing Intel and Microsoft and all PC customers a favour by making the IBM designs into the world standard. Indeed, IBM was rather proud of establishing the global benchmark in what was a small specialist market sector, as well as holding the lead in the much larger mainframe market. IBM finally launched its first PC in 1981 without tying either Intel or Microsoft exclusively to itself. The new PC cost $3,000 and, by today’s standards, was very small. Although the claim ‘IBM-compatible’ quickly became a common standard for most PCs, except Apple, these developments had two consequences for IBM:

1 its worldwide PC standard allowed competitors to produce to a standard design for the first time;

2 no restriction was placed by IBM on Intel and Microsoft supplying similar products to other companies.

IBM reasoned that these issues did not matter because it would dominate the small PC market just as it did mainframes. In addition, IBM judged that the small PC would never replace the large mainframe, so it posed no significant threat to its main business. As it turned out, the company was at least partially wrong on both counts.

Technological advance and branding in the later 1980s

Although computer markets were driven by new technology, the key development was IBM’s establishment of the common technical design mentioned above. This meant that its rivals at last had a common technical platform to drive down costs. IBM was unable or unwilling to find some way of patenting its design. IBM’s strategic mistake was to think that its reputation alone would persuade customers to stay with its PC products. However, its competitors were able to exploit the new common IBM-compatible PC design to produce faster, reliable and cheaper machines than IBM, using the rapid advances in techno logy that occurred during the 1980s. IBM and other computer companies continued to spend funds branding their products. However, their suppliers, such as Intel and Microsoft, also began to spend significant sums on advertising. Microsoft’s ‘Windows’ was launched in the late 1980s and Intel’s ‘Pentium’ microchip was launched in 1993. Both were destined to dominate their respective markets.

In the late 1980s, IBM recognised the competitive threat from Microsoft and Intel. It launched its own proprietory software, OS/2 Warp, in 1994, to counteract this. It also negotiated with Apple to set up a new computer chip standard, the Power PC Chip, with the aim of attacking Intel. Although both initiatives had some innovations, they were too little and too late. IBM struggled on with the concepts, but the software made little headway against the established Microsoft and the chip was abandoned in the mid-1990s. By 1993, IBM’s advertising was forced into claiming that its PCs used the Microsoft ‘Windows’ operating system and its computer chips had ‘Intel inside’. The IBM PC was just one of many computers in the small-computer market.

Recognising the need for change, the company began to develop a new organisational structure in 1991. Up to this time, the organisation had been centred on two central aspects of the company:

1 Products. The company provided the most complete range of products from mainframes to telecommunications networks, from PCs to computer software. Each main product group sold its products independently of other groups.

2 Country. The company was the leading provider in most countries, with the ability to provide computer solutions tailored at national level for the particular requirements of each country. Each major country had its own dedicated management responsibilities.

While this provided strong local responsiveness, it meant that global and international company customers were not always well served through country companies and individual product offerings. In a new organisation announced in 1991, the major global industries such as banking, insurance, oil and gas, manufacturing, telecommunications companies and transport were tackled by dedicated teams with a complete range of products worldwide: the new structure involved the development of Industry Solution Units (ISUs). Each ISU had its own dedicated management team and was measured not only on sales but also on customer satisfaction. However, the country and the product managers were reluctant to give up control to the ISUs, which often operated internationally across many countries. This resulted in confusion among customers and some internal political battles inside IBM.

After the major profit problems of the early 1990s, IBM clearly needed a major shift in strategy. A new chief executive, Lou Gerstner, was recruited from outside the computer industry, but he was faced with a major task. The conventional strategic view in 1993 was that the company was too large. Its true strengths were the series of national IBM companies that had real autonomy and could respond to specific national market conditions, and the wide range of good IBM products. But the local autonomy coupled with the large IBM product range meant that it was difficult to provide industry solutions. Moreover, IBM’s central HQ and research facility had difficulty in responding quickly to the rapid market and technological changes that applied across its global markets. The ISUs had been set up to tackle this but did not seem to be working. The most common strategy solution suggested for IBM was therefore to break up the company into a series of smaller and more responsive subsidiaries in different product areas – a PC company, a mainframe company, a printer company and so on. The solution adopted by IBM was to turn itself into a computer services company: this is described in the web-based case ‘Thinking outside the box at IBM’ (see weblink in Part 6 ).

1 Use the five key elements of strategic decisions (see Section 1.2.4 ) to evaluate IBM’s strategic management. What conclusions do you draw for these and added value?

2 What are the strengths and weaknesses of IBM? And what are the opportunities and threats that it faces from the competitive environment surrounding the company?

3 What strategies would you have adopted in 1993 to turn round the situation at IBM? When you have made your choice you might like to look at the book’s free, online webcase to see what the company actually did next. The web link for this case ‘Thinking outside the box at IBM’ is located in Part 6 of this book.